This year I had the opportunity to join experts from all over the world and speak at one of the biggest and most distinguished aesthetics and anti-ageing medicine congresses in the world! The 16th Aesthetic & Anti-Aging Medicine World Congress – AMWC, was held in Monte-Carlo under the High Patronage of H.S.H. Prince Albert II of Monaco. Under the scientific supervision of the World Society of Interdisciplinary Anti-Aging Medicine (WOSIAM), the conference was the ideal forum to stimulate ideas, educate, share expertise, initiate intense discussions and extend networking opportunities. 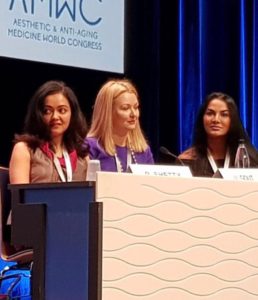 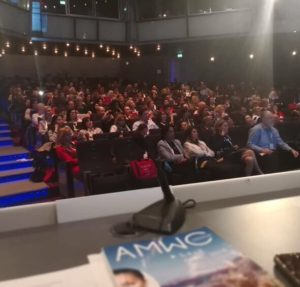 Over the course of 3 days, over 12000 delegates joined AMWC for a highly interactive, stimulating and multidisciplinary program. Dermatologists, plastic surgeons and other aesthetic professionals from all over the world gathered in Monaco to update their skills and showcase new products and devices.

With hundreds of sessions presented by experts from all over the world, this was the biggest congress ever! Key themes around aesthetics medicine and anti-ageing treatments were covered during these three days, highlighting the latest developments and innovations in aesthetic medicine. I was honoured to be part of the experts presenting at the AMWC this year around ageing of the orbit from skin to bone.

Facial aging is a process involving the aging of soft tissue and bony structures. It reflects the dynamic, cumulative effects of time on the skin, soft tissues, and deep structural components of the face, and is a complex synergy of skin textural changes and loss of facial volume. [1]

A youthful periorbital contour consists of a well-shaped and correctly positioned eyebrow, a well defined upper-eyelid platform with supra-tarsal crease, a lower lid position 1–2 mm above the inferior edge of the rim, a smooth curve at the lid/cheek junction and absence of excess fat pads, loose skin and wrinkles.

Multiple small changes contributing to the ageing of the periorbital area occur over time in six key areas:

To better treat the effects of aging it’s important to first understand how aging affects every layer of the orbital area.

During the ageing process, there are several changes that become visible in time at the skin level: visible thickness of the skin increases on forehead and cheeks and decreases around the eyes, the skin becomes thinner around the orbits compared to lower face, due to UV sun damage, smoking and repeated mimetic movements wrinkles accentuate, dermal melanin deposition causes dark coloration in infra-orbital skin, and the decrease in elasticity around the upper eyelids causes excess skin fold.

Underneath the skin, along with the subcutaneous tissue is a thin layer of fat and changes over time result in an ”A frame hollow”, exposure of the bony orbital rim, absence of an eyelid crease and mild ptosis. At the infra-orbital layer, the fat increases over time, the orbital septum becomes lax and enables pseudo-herniation of the fat pads with age-palpebral bags. Another visible change is the double convexity deformity – bulging lower eyelid fat is juxtaposed to the hollow of the tear trough. The lateral orbital fat pad goes through changes as well and the most visible sign of aging is deflation with lateral brow ptosis. The main contributors to ptosis are weight of unsupported tissue mass over the temporal fossa, lateral orbicularis oculi and corrugator muscle activity (brow depressors) and lack of frontalis contraction in the lateral brow (brow elevator).

The third layer, the superficial muscular aponeurotic system (SMAS) is described as a mid-level fibromuscular layer separating the deep facial fat from the superficial facial fat. This facial layer of connective tissue is what envelopes the muscles in the face that create animation or movement. The SMAS plays a significant role in the aging process. As we age, the SMAS weakens in it support. In other words, its ability to hold up the muscles, fat and skin of the face will diminish over time. This process, combined with the toll of gravity and environmental factors, causes the facial features to sag and lose their youthful vigor.

Changes during the ageing process occur at the fourth layer, the fat pads, as well.

Around the fifth decade and beyond, bulges appear below the lower eyelid, consistent with protrusion of the temporal, nasal, and central lower eyelid fat pads. The tear trough elongates and the inferior orbital rim becomes visible. A hollow develops in the centromedial cheek below the tear trough, termed the “V” deformity.

With age, the malar fat pad descends, baring the inferior orbital rim and contributing to the formation of the nasolabial fold. The vertical length of the lower eyelid appears to increase. Ptosis is also evident in the brow and the lower face. The tear trough, often the initial sign of mid-facial aging, occurs in the lower eyelids as a hollow immediately below the lower eyelid fat prominences.

The fifth layer, the ligaments, attaches the soft tissues to the facial skeleton. It links all layers of the face and serves to stabilize the face in youth, but continuous muscular activity in combination with intrinsic aging changes lead to weakness of ligamentous support [2]. Thus, the transient soft tissue displacement occurring over the course of a lifetime with facial animation produces stretching of facial ligaments and causes subsequent ptosis of the soft tissues of the face. As one gets older, the orbicularis retaining ligament tends to get thinned out and stretched, with these changes more prominent in the central aspect.

To better understand the changes that occur during the fifth layer, the bone structure, during the aging process, let’s look at the results of a study conducted by Dr. Robert Shaw Jr, M.D and his colleagues. They did CT scans of the facial bones in 120 men and women aged 20 to 40, 41 to 64 and over 65. They then created 3-dimensional reconstruction of the scans. They found with age, the scans showed for example, the bones that make up the eye sockets recede, enlarging the sockets. A few less millimeters does not seem much, but this is enough to add the appearance of excess or droopy skin around the eyes. Similar loss of bone and therefore volume happen in the bones of the middle face, including the brow bone, nose and upper jaw, including the orbital opening around the mouth.

Due to the changes occurring at these five layers of the orbital area over time, some people struggle more with wrinkles, some more with discoloration and hollowing under the eyes, some with sparse lashes and brows. The good news is that there are treatments available to treat each condition and prevent further effects of the ageing process. For an assessment of your condition, book and appointment

About the Author: Dr Anushka Reddy